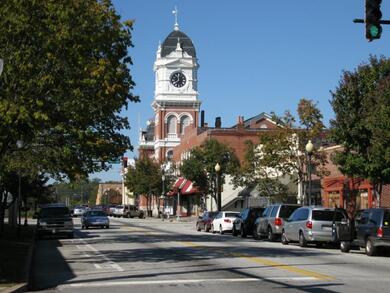 The opportunity for First Presbyterian to live out its vision has never been greater.  Covington has been a vibrant community for decades, with a strong economic base and hospitable culture.  Large scale textile manufacturing made Covington a regional hub between the late 1800s and mid-1950s.  This charming and friendly exurb is now known nationally and internationally from films and TV series to have antebellum homes, a bustling, picturesque town square and an 1884 vintage courthouse recognized in the likes of The Dukes of Hazzard, In the Heat of the Night, Vampire Diaries, Remember the Titans, Sweet Home Alabama, My Cousin Vinny, Footloose, The Originals and Dumplin’, and A Man Called Peter that documents the life of Peter Marshall who served as pastor of FPC Covington from 1930-1933.  These are just a handful of the movies and television shows filmed in our town.  Just on the edge of metropolitan Atlanta, Covington enjoys the best of both worlds, being close enough to enjoy and appreciate all the city offers and far enough away to possess a distinct identity and sense of community.

The vibrancy of the Covington community owes a debt of gratitude to its mid-1900s leadership that foresaw the demise of local textile operations and the decline of family farming.  Those leaders brought significant industrial investment and employment that now includes Bridgestone Golf, Michelin, Stanley Tools, General Mills, Facebook and Takeda Pharmaceutical.  Today, Covington and Newton County enjoy an economic base that is unusually large for a community of its size.  The downtown area is now enjoying a wave of regentrification as millennials renovate old homes and shop and dine by walking, biking and riding golf carts to and from their homes.  The community also enjoys an award winning public school system (Newton County Schools) and several colleges and universities, including Oxford College of Emory University, the campus on which Emory was founded in 1836.